“Being in a Tara production pushes you to places within yourself that you never thought you could reach, and when you get there, and you think you have done everything you can, there is still one more performance to go, and you have to stretch even further. It is in that place, after crossing over the threshold, that you discover new things about yourself.” – Alumnus, Class of 2009

Tara Performing Arts High School is committed to an inclusive and welcoming environment for everyone; we extend the same rights and privileges to all prospective and current students. Tara does not discriminate on the basis of race, color, national origin, gender, gender expression, gender identity, sexual orientation, pregnancy, age, religion, disability, medical condition, marital status, citizenship status, military service status or other basis prohibited by law.

At the heart of Tara’s vision is the conviction that the performing arts are the ideal vehicle for adolescent intellectual and personal development. Our curriculum, which weaves together engaging academics with drama, music and movement, awakens in each student a unique capacity for inquiry through discipline and artistic expression. Performance at Tara builds confidence and community spirit, preparing students for success in all of life’s endeavors. All-school productions include a holiday choral festival and a major musical. In addition, each class works in depth on a play, enriching the production with historical, literary and cultural exploration and research.

Over the course of four years at Tara, students will have been actors in a minimum of four class plays and four musicals and will have had the opportunity to support the plays of other grades, either in tech, costuming, set construction or, occasionally, as a supporting actor. In addition, they will have spent many hours in rehearsal, exploring and discovering new territory within themselves. A parent working on the set for a Tara production once remarked that he suddenly had an “epiphany”: the performances he so looked forward to were merely a by-product of the real transformative work happening in rehearsals. Rehearsals at Tara are deliberately long, intense and concentrated over a period of three or four weeks (six weeks for the all-school musical). The purpose is immersion in the process, so that what is being worked on or discussed lives strongly within each individual. The result for the students is more than just a memory of a good play; something has been created which lives within them for the rest of their lives. A crucible has been formed that holds the play, the form, the casting and the process. The hours of intense rehearsal time are the fire, and the alchemy that takes place is a spiritual journey of self-discovery that allows for self-knowledge that would otherwise not be revealed. Casting for all plays and musicals is done by the director based on an understanding of the deeper aspects of the characters and the students’ development and disposition. We know our actors well and expect them to accept direction that makes them reach levels of talent and insight that they did not imagine possible. Given the quality of our productions, audiences continually express amazement that highly competitive auditions are not part of our acceptance process (although students might be given an opportunity to sing for the director so that voices and roles in the musical align!).

The ninth grade play focuses on commedia dell’arte or other playwrights that showcase commedia-like themes. This type of comedy works with exaggerated human characteristics, perfectly meeting the ninth graders’ state of being. Embodying these larger-than-life characters, acting out the extremes that they feel inside themselves, helps to bring students into inner balance as they discover the precision and hard work that comedy requires. 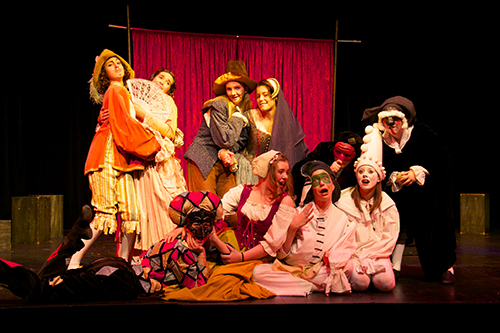 In the spirit of community that is such an important part of our program, the tenth and eleventh grades work on a large-cast play together. In alternate years this will be a Shakespeare play, so that by graduation every student will have had the privilege of being immersed in the work of this great master. Every other year, the director looks for a play that has the characters and the depth of subject matter to speak to a large combined group of students. 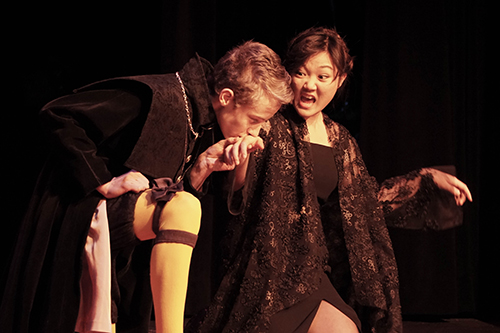 The twelfth grade students begin their year in theatre with scenes from a play that underline the Michaelmas theme of the year (recent themes have been forgiveness, compassion, honor, and commitment) and are offered as a focal point of the Michaelmas Festival 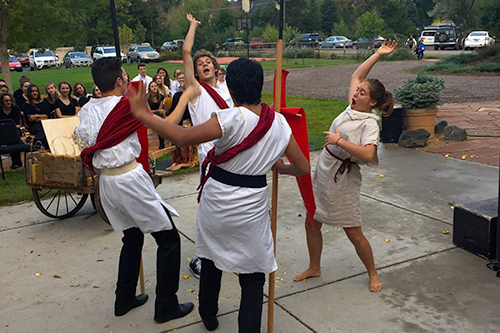 The senior play is a modern drama that raises thought-provoking themes, the in-depth experience of which we would like those particular students to take with them into adulthood. Whereas in earlier grades the director has cast the plays, the twelfth graders work together as an ensemble – for as long as it takes – to both satisfy their personal desires for roles and meet the needs of the characters, resulting in a powerful piece of theatre. This process, which takes place during the leadership retreat, echoes and reinforces the central spirit of the senior year at Tara.


“This play will stand as a point in my life, an event that I can look back on and remember. I feel that such an opportunity to work so closely, so entirely and so deeply on a production will not present itself again. I have been given all the tools to be an actor, and while I feel that my talents and passions may be better suited elsewhere, I am satisfied to think that these tools can be applied to daily life. After all, ‘Drama is life with all the boring parts taken out!’” – Twelfth Grade Student 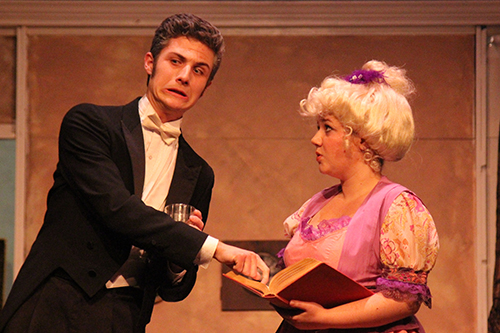 The annual musical is the dramatic celebration that rounds out the school year. Academic classes end in mid-May, and we have a full month for the rehearsal process, in which students can deeply engage in all aspects of the production (for some this may include tech). One of the foremost criteria that we look for in choosing a musical is that there are challenging and engaging chorus roles, because most of the school will be in the chorus. In “ensemble thinking,” all roles are of equal importance; all serve the whole. Additionally, we ask: Is the music itself of high enough quality to warrant a semester's worth of work and attention? Is the story worth telling? Are the subjects that will be discussed as a result of working on the piece thought provoking, transformational, something that will work on the higher nature of the human being?


“I found that theatre is a lot more than rising to stardom; it is the study of life, which I figure is important for just about anyone. … Before each performance [of Les Misérables] we would gather in a huge circle. … Then we would play ‘Who am I?’ so that each double-cast actor could remember which role he or she would be playing that night. But '‘Who am I?’ is more than simply stating the name of the character you intend to portray; it is letting the essence of the character radiate out from the way you say your name, the manner in which you hold yourself, and the gaze of your eyes. As the circle of teenagers began to change into convicts, beggars, whores and nuns, I began to wonder: What if we didn't have characters to hide behind, what if we played this game without the roles we were portraying? Who am I? … By exploring different characters, we learn to understand human nature, which in turn helps us to make a conscious choice of the role we play in life.” – Alumna, Class of 2004 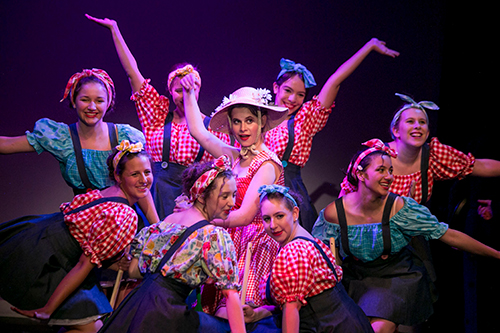 All Tara students participate in our choral program, which is held two afternoons a week for much of the school year. Under the inspired guidance of our musical director, even those who believe that they can’t (or won’t) sing find themselves loving choir and joyously adding their voices to the harmony, even performing solos. The year in music begins with our Michaelmas Festival, where beloved African songs and seasonal music ring out into the crisp fall air. After that, the first semester of choir is devoted to preparing the music for Christmas Candlelight Festival, which includes a complete mass and sacred classics of the season. In the second semester, choir focuses on the all-school musical, performed in June. Culminating the year of music is graduation, at which choral selections from throughout the year are offered as part of the ceremony.


“I still remember vividly the first time I sang with the Tara choir. I was a shy, new boarding student a few days into my tenth grade year. The choir took its first breath together and burst into the opening call of Siyahamba. I was blown away. Never before had I encountered a group of people so willing to sing with all of their hearts and so aware of one another to be able to make such harmonies. As our voices blend together, we become greater than the sum of our parts and it becomes quite clear to me that, together, we can change the world. Now a senior, I still experience that amazement every time we sing together. And I have come to learn that the things that make our singing so powerful – awareness, dedication, enthusiasm, warmth of heart – permeate every aspect of Tara. Whether the subject is calculus or Shakespeare, folk songs or Mozart, education is fully embraced here.” – Twelfth grade student 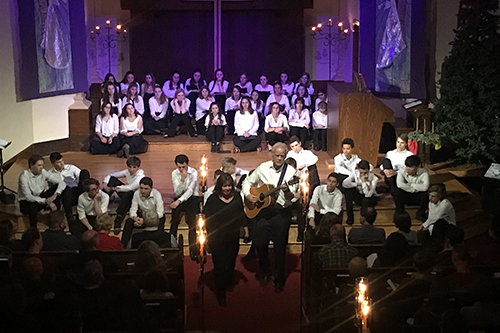 A major part of the Tara performing arts curriculum is the choral music prepared for the Candlelight Festival. Choir rehearsals begin in October and continue up until the week before the first Candlelight performance in late December. The Candlelight Festival has become a beloved Boulder event, reaching far beyond the immediate Tara community. The Tara choir prepares a major work, for example a Mozart Mass, along with other seasonal works and some solos. The Tara Handbell Choir plays, and the Christmas story is told through eurythmy. All this is presented in an atmosphere of candlelit reverence without the interruption of applause.


“I have a sense of eager anticipation as we progress through the Candlelight program from one beautiful piece to the next. Then comes the moment when we sing ‘Silent Night’ and everyone’s face is radiant, lit by the glowing candles. Following this comes the last piece, ‘Gaudete,’ and as we process out singing it, I feel as if we are carrying the spirit of Candlelight to the world. It makes me want to climb on the roof of the church and sing as loudly as I can.” – Alumnus, Class of 2009